I have always believed that if children don’t have the proper school supplies to begin the new year, it will be extremely difficult for them to catch up with classmates. As an author, I also believe that lack of proper supplies can lead to illiteracy. If you can’t read and write, it becomes increasingly difficult to discover a talent for becoming an author, not to mention finding success in other fields. 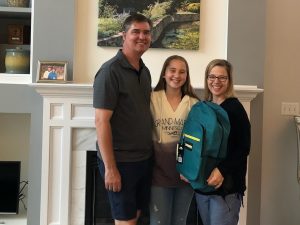 The need for school supplies continues to grow. This year, the Wilder Amherst H. Foundation received 2,600 backpacks from the United Way for children enrolled in Wilder programs. In all, on United Way Action Day 40,000 backpacks were packed for kids in the Twin Cities—a staggering amount. Since the United Way changed its focus here in the Twin Cities to promoting education by providing necessary school supplies, the process of collecting backpacks from corporate donors has changed how Wilder meets these needs. With the help of the United Way, Wilder can serve an ever-growing number of children.

I adopt a Wilder program every year and I was assigned to filling 75 backpacks for the Quest program, which also provides housing for Wilder clients. Because of that pesky fractured elbow that is still healing, I could not have completed this endeavor without the generous help of the amazing Stumne family. Paula, Erik, and their daughter Sophie did everything from removing plastic and sorting folders and notebooks to filling backpacks, loading up boxes, and even making an emergency trip to Target for additional supplies.

By the end of our efforts, my house had gone from being full of supplies to being full of nine boxes stuffed full. Those were then picked up by professional movers from Two Men and a Truck, who assisted in delivering them to the Foundation. Another bonus I hadn’t realized at the time was that the boxes would later be used by families in the Quest program for moving.

Another special moment came from the movers themselves. Once they realized this wasn’t a typical move of furniture but a donation, t 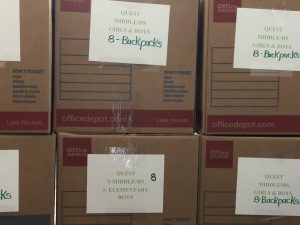 hey took even greater pride in their job. Since we needed larger boxes to accommodate so many backpacks, Wilder was grateful to have their assistance. Paula, Erik, and Sophie enjoyed helping so much they were already talking about packing more backpacks for next year! Could 100 backpacks be the goal for 2020? With help like that, it’s a distinct possibility!