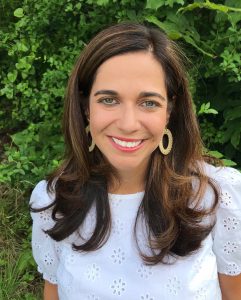 I have read Renee Roberson’s great columns in The Muffin, the official blog of WOW! Women On Writing. She is an award-winning author and magazine editor.

Kathryn Schleich: Where did you grow up? Did you always have the desire to be a writer?

Renee Roberson: I had sort of a nomadic childhood. I was born on a military base in Louisiana but spent much of my early years in Texas. My mother and step-father moved around a lot, eventually settling in North Carolina when I was in seventh grade. I believe I attended something like five or six different schools by the time I was in middle school. I was an only child so books were my escape, and I’ve been writing stories for as long as I can remember. I went through a period in elementary school where I wanted to be a teacher, then a DJ (I know!), but I think I always knew I would do something with writing.

KS: What’s the first piece you had published?

RR: The first big thing I remember having published was a newspaper article when I was in college. I had been reporting for the campus newspaper for a few years, but I did an internship at a local daily newspaper. I wrote an article about a community nonprofit and it ended up above the fold on the front page in one of the issues. My adviser was so excited—I remember her showing it to my communications class.

RR: I attended the University of North Carolina at Ashville and majored in mass communication. I originally had hopes of being a broadcast journalist, but the school didn’t have a huge broadcast department at the time, so I was steered into news writing. I’ve held jobs in media planning, public relations, magazines, freelance writing and currently am the editor of a monthly lifestyle magazine in the town where I live.

KS: I was a journalism major, with an emphasis in broadcasting, so I’m familiar with wanting to work in the industry. I worked in small town radio and doing the hog reports wasn’t glamorous! For you, how has being a journalist as well influenced your writing style?

RR: I think being a journalist has taught me to always dig deeper, and to be a great listener. You can add so much depth to a story by observing and listening to the people around you. I feel like it has also given me a gift of being able to write good dialogue.

KS: We both write about crime, but your focus is on true crime. What led you to this genre?

RR: I’ve been fascinated by true crime for as long as I can remember, and I have no idea why. I read The Deliberate Stranger by Ann Rule when I was in high school and was instantly hooked. I think I’ve probably watched every episode of “Unsolved Mysteries” in existence and have been re-watching the show on Amazon Prime. I feel like I’ve had some close calls with evil in my life and often wonder why I’ve been so lucky and others haven’t—morbid as that is.

KS: Personal experiences with evil is what set me to writing about crime as well. Do you have a specific writing process that works for you?

RR: I wish I could say I did. Some of my best short stories have come from getting an idea and sitting down right then to flesh the story out. With non-fiction (paying articles, etc.) I have to have a hard and fast deadline, or I won’t get things done on time. I’ve written a few novels that haven’t been published yet, and I find I do best when I participate in something like NaNoWriMo. I’m also a somewhat reformed pantser (someone who writes by the seat of their pants, instead of planning their work out. I personally did not know this – KS).

KS: That may be, but you are an award-winning writer. Congratulations! In 2017 your chilling thriller, “The Polaroid” won first place in the 2017 Writer’s Digest Popular Fiction Awards. How did you come to write this story, seemingly very much based on current headlines at the time?

RR: I believe I had read an online article about the case (the young woman’s name was Tara Calico), and I remember thinking about the old Polaroid photos we used to take. I thought that would make a great title for a story or a novel (I often come up with the titles of my stories before anything else). One day I sat down at the computer, typed “The Polaroid,” and envisioned what would happen if the girl in the Polaroid someone found was actually still alive, along with a child who had also been kidnapped. Before I knew it, I had almost 2,000 words down on the page, and my heart was racing from the adrenaline of the action in the final scene. I only did a few minor edits before holding my breath and sending it off to the contest. I haven’t been able to duplicate that type of success since!

KS: You are the mother of two. Have any of your kids expressed interest in writing?

RR: My son, who is 14, has always had a great voice. He’s so funny when he wants to be. But he doesn’t have a lot of patience for the revision process. My 16-year-old daughter, on the other hand, loves to write along with many other interests. She enjoys writing dystopian and fantasy, and when I walked into her room a few months ago, I found an entire wall of Post-It notes where she had been mapping out one of her stories. I could learn a thing or two from her.

KS: You’ve spoken candidly of battles with your weight, a fact so many of us can relate to. Have those battles influenced your writing?

RR: I often explore themes of insecurity and self-image in my writing. My mother’s side of the family is Hispanic, so I tend to be curvy anyway, and it’s tough to find balance between natural curves and not being able to button my pants! Sometimes it’s tough because I feel like the more time I spend time in the chair writing, the more likely I am to fall back into those bad eating habits of grabbing convenience food and snacking on things that aren’t so healthy.

KS: What is best advice writing advice you’ve ever received?

RR: Wow, that’s a hard one! I don’t think there’s any one piece of advice I’ve received that’s stayed with me, other than don’t expect your first book to get published. What’s stayed with me is all the people in my life over the years who told me to never stop writing. Even though there have been many times I’ve wanted to give up, the fact that those people—from my high school English teacher to that college adviser I mentioned before (who won a Pulitzer for investigative reporting in the 1970s)—believed I could do something with my writing has always meant a great deal to me.

KS: On the other side, what advice would you give aspiring authors?

RR: Writing is a lifelong journey. It may take you years to get published, but you shouldn’t give up. The journey of writing will take you down various different paths, and it will bring you great joy and also great sorrow. But it’s a gift, and even with those highs and lows, that is something to be very proud of.

KS: What would you like your legacy as a writer to be?

RR: I want people to read my stories and books and remember the characters long after they’ve finished the page.

KS: What projects are you currently working on? I’m finally following my dream of broadcasting, just in a different medium. I’m developing a true crime podcast called “Missing in the Carolinas,” where I will spotlight different missing persons cases in North and South Carolina. I’ve lived in the south for a long time, and there are some cases that really stay with you. I’ve been encouraged by how other podcasts have helped bring closure to cold cases and hope I can help do the same. I’m also considering producing an anthology of some of my best short stories.

KS: Anything else you would like readers to know?

RR: You can visit my website at FinishedPages.com to learn more about me and get updates on the projects I mentioned above. Thank you for having me!