Author Angela Ajayi’s gorgeous and haunting short story, Galina, was one of twelve winners published in the inaugural anthology in the Pen America Best Debut Short Stories for 2017. The award recognizes literature’s most promising new voices. Angela recently took time from her busy schedule to share insights on her writing journey with me.

Kathryn Schleich: Do you remember the first piece you ever wrote? Was the work fiction or nonfiction?

Angela Ajayi: In 2007, the year the Polish journalist Ryszard Kapuscinski died, I attended a tribute to him at PEN World Voices Festival. Salman Rushdie was there; he too admired Kapuscinski’s work and moderated a panel discussion on the journalist. For a long while, I had in my possession a dog-eared version of Kapuscinski’s “The Shadow of the Sun,” a collection of essays about the time he roved his way through a number of African countries, some of them still in the violent throes of dictatorial rule. I wrote about the discussion at the tribute for Wild River Review, an online journal for which I was a contributing writer at the time. This would be my first publication; it was titled “Remembering Ryszard Kapuscinski, the Cosmopole.” It was a joy to write and a terror (for me) to publish, even as a blog posting. It also may or may not be accessible today because Wild River Review has since discontinued its blog. (Editor’s note: this piece indeed does not appear to be available online anymore.)

KS: You have a background in publishing. Did your interest start with editing other people’s work before evolving into your own writing?

AA: I think it was T. S. Eliot who said, “Some editors are failed writers, but so are most writers.” I suppose I may have believed the former about myself for much too long and then learned—through countless hours working as an editor with wonderful writers—that you only fail if have some talent and you don’t write or better yet, if you don’t try to improve your knowledge of the craft. My interest in writing has always been there but the belief in my ability to write against failure has evolved over time.

AA: It would be the interview I did with Marguerite Abouet, an Ivorian writer who has since published a number of graphic novels set mainly in Abidjan, Ivory Coast. She spoke French so my questions were written in English and then translated and sent to her. She was gracious and real; she was serious about how Africa in general was often portrayed in the Western media. (Think war, disease, and poverty.) She set out to affect change in this regard and to dwell not so much on what makes us different but on what unites us in our daily existence: Our dreams, our desire for love and friendship and so on. And she accomplished this while conveying a rich and fascinating way of life in Ivory Coast.

KS: In a 2017 interview you gave to Brittle Paper you discussed your anxieties about becoming a writer: “I’ve always harbored ambitions to write though lacked the confidence to do so until about ten years ago when I started writing for Wild River Review.” You felt you couldn’t write fiction well, but the prose in your award-winning story, Galina, says otherwise! This is a very tender story of a mother and daughter’s relationship, set in an exclusion zone of a nuclear power plant accident. Galina contains gorgeous imagery, and the reader becomes absorbed in an intimate relationship with the landscape and characters, feeling Galina’s anxiety to protect her mother. That said, was there a particular moment when you felt your apprehensions about writing had been overcome?

AA: Thank you for such lovely words about Galina. The writing and subsequent publication of the story itself was its own moment of overcoming—it was probably my second story ever written—and within it I deployed as much knowledge about writing that I had picked up over the years. When I hit on the kinds of imagery I wanted to use in the narrative, the story flowed toward its completion easily. Apprehensions? They are still there. Writing for me always has its share of angst and shame about merit and readability. I usually overcome these apprehensions in the heat of writing a story or essay that I believe is working; otherwise I’m squashing demons along the way.

KS: The Brittle Paper interview followed Galina being chosen as one of twelve stories winning the prestigious PEN/Robert J. Dau Short Story Prize for emerging writers. You’ve mentioned the story was inspired by documentary, Babushkas of Chernobyl, about a group of women living in the Exclusion Zone in the Ukraine. When I read Galina again, these women remind me of the willful individuals who refuse to evacuate their homes due to a coming disaster, such as a hurricane. You’ve said part of the women’s refusal to leave has to do with their mortality, which is surely quickened by the poisonous landscape. Does sheer stubbornness inform their decision in any way? Other thoughts on why they stay?

AA: When I visited my grandparents in their Ukrainian village over many years of my youth, I was struck by how dependent they were on the land. 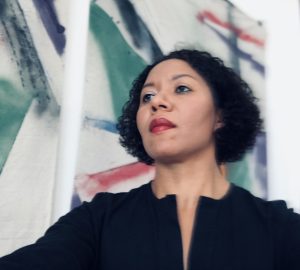 Every spring and summer, they farmed their allotted plot of fertile land and produced much of the food they ate and would eat into the winter months. To them, the land was not only their sustenance but their life. And it may have been so for the old women who stayed in the exclusion zone in the aftermath of Chernobyl. As for stubbornness, I think that could also be part of it too. A kind of skepticism about an official narrative that dates back to the Soviet era, especially about something that isn’t visible. There is this great quote that comes to mind from Svetlana Alexievich’s Voices from Chernobyl; it marries need and some amount of skepticism: “Come get your apples! Chernobyl apples!’ Someone told her not to advertise that; no one will buy them. “Don’t worry!” she says. “They buy them anyway. Some need them for their mother-in-law, some for their boss.”

KS: Your works explore the meeting of multiple cultures: in Galina, it’s Nigerian and Ukrainian. As an American citizen as well, you possess a diverse perspective that many people do not have. How does it inform your writing?

AA: While having access to three different cultures has served to broaden the range of material that I can draw from, it has made the writing and publishing of the stories themselves more challenging for me. (Not having an MFA doesn’t really help either.) When you attempt to connect rather disparate worlds, when you dwell in spaces where certain juxtapositions can be quite jarring and unfamiliar for many readers, it takes more than some courage and grit to get these stories down and out in the world. And yet it feels necessary to do so because the world continues to turn on our beautiful array of differences and similarities.

KS: Does your daughter harbor any writing ambitions?

AA: This year in first grade she wrote four short books, all of them about a character called Grumpy. Grumpy is, well indeed, very grumpy but he also really wants a dog and he also eventually must learn to be nice… the hard way. I think she already has some of the basic elements of fiction down—characterization and conflict—and with continued enthusiasm for learning, of which she has plenty, I hope she’ll come to enjoy writing.

KS: Your daughter naming a character Grumpy makes me laugh, but she also provides a very good lesson for any age! What is the best advice you’ve received as a writer?

AA: I’m big on working lots of imagery into my work. When I first started writing fiction, I was advised more than once to not be too heavy handed about imagery. Or too pat about metaphor in fiction either. And I welcome such advice because I think it is in those more nuanced moments in fiction that profundity often occurs.

KS: On the other side, what advice would you give aspiring authors?

AA: Allow yourself to explore your writing ideas in different genres. For instance, while nonfiction might allow you to write about the things you’ve known or experienced, fiction could very well afford you the freedom and luxury to go into a more imaginative space and to make creative leaps that might otherwise be constrained by the parameters of subjective truth and fact.

KS: You’ve been working on a collection of short stories. Are you publishing soon?

AA: I’ve written about eight stories, and I’m reworking them to the best of my abilities right now. I’m too careful of a writer; I take my sweet time even if it’s not always advisable in this era of rapid everything.

KS: You also noted you’d like to begin work on a novel. Do you have a work in progress?

AA: No, not yet. See my response to the previous question, alas!

KS: What would you like your legacy as a writer to be?

AA: I am not convinced that I’ve accomplished nearly enough as a writer to answer this question to my own satisfaction. But like many writers, I want my work to have some resonance through time and place, especially across at least three continents, and to outlive me in relevance.

To experience more of Angela’s writing, including short stories, interviews, and reviews, visit her website.