Who doesn’t need some humor and joy in the midst of the chronavirus pandemic? My youngest brother, David, is a huge Weird Al Yankovic fan. In early Januar 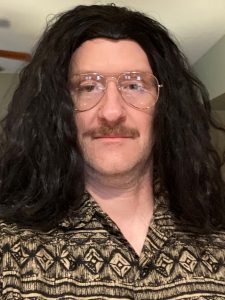 y of 2020 he was invited to California to participate in a group photo shoot with Weird Al himself. He flew to California, stayed overnight, and then returned home to Nebraska. Little did we realize he’d been sworn to secrecy. In fact, most of the family forgot about it. Until now.

As David says, “In January I was one of two hundred thirty-two Weird Als in a photoshoot for the NY Times Magazine, after months of keeping this secret it is now out. Click on this link https://www.nytimes.com/2020/04/09/magazine/weird-al-yankovic.html. Can you find me in the photo? Attached is a photo of me in the wig, shirt, glasses, and mustache (real). The photo was taken before I left Lincoln. Scroll down to the group photo and see if you can find me! Not Where’s Waldo but Where’s David?”

The article in the Times magazine is very in depth, about a painfully shy (and whip smart) young man named Alfred Yankovic who became a star performing hilarious parodies of popular songs (Eat It, Like A Surgeon). Almost seven decades later, he’s still making us laugh.

Here’s the photo of David in all of his Weird Al wig and Hawaiian shirt glory. The group photo is featured as part of the article. I think I’ve found my brother, but can you?